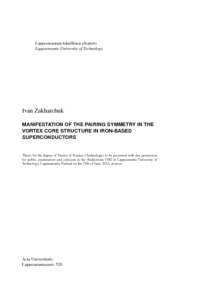 The superconducting gap is a basic character of a superconductor. While the cuprates and conventional phonon-mediated superconductors are characterized by distinct d- and s-wave pairing symmetries with nodal and nodeless gap distributions respectively, the superconducting gap distributions in iron-based superconductors are rather diversified. While nodeless gap distributions have been directly observed in Ba1–xKxFe2As2, BaFe2–xCoxAs2, LiFeAs, KxFe2–ySe2, and FeTe1–xSex, the signatures of a nodal superconducting gap have been reported in LaOFeP, LiFeP, FeSe, KFe2As2, BaFe2–xRuxAs2, and BaFe2(As1–xPx)2. Due to the multiplicity of the Fermi surface in these compounds s± and d pairing states can be both nodeless and nodal. A nontrivial orbital structure of the order parameter, in particular the presence of the gap nodes, leads to effects in which the disorder is much richer in dx2–y2-wave superconductors than in conventional materials. In contrast to the s-wave case, the Anderson theorem does not work, and nonmagnetic impurities exhibit a strong pair-breaking influence. In addition, a finite concentration of disorder produces a nonzero density of quasiparticle states at zero energy, which results in a considerable modification of the thermodynamic and transport properties at low temperatures. The influence of order parameter symmetry on the vortex core structure in iron-based pnictide and chalcogenide superconductors has been investigated in the framework of quasiclassical Eilenberger equations. The main results of the thesis are as follows.

The vortex core characteristics, such as, cutoff parameter, ξh, and core size, ξ2, determined as the distance at which density of the vortex supercurrent reaches its maximum, are calculated in wide temperature, impurity scattering rate, and magnetic field ranges. The cutoff parameter, ξh(B; T; Г), determines the form factor of the flux-line lattice, which can be obtained in _SR, NMR, and SANS experiments. A comparison among the applied pairing symmetries is done. In contrast to s-wave systems, in dx2–y2-wave superconductors, ξh/ξc2 always increases with the scattering rate Г. Field dependence of the cutoff parameter affects strongly on the second moment of the magnetic field distributions, resulting in a significant difference with nonlocal London theory.

A reasonable agreement between calculated ξh/ξc2 values and those obtained experimentally in nonstoichiometric BaFe2–xCoxAs2 (μSR) and stoichiometric LiFeAs (SANS) was found. The values of ξh/ξc2 are much less than one in case of the first compound and much more than one for the other compound. This is explained by different influence of two factors: the value of impurity scattering rate and pairing symmetry.