Computational studies for the design of process equipment with complex geometries 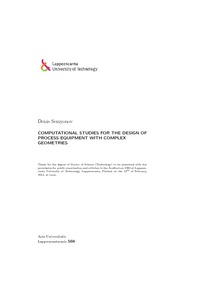 This study combines several projects related to the flows in vessels with complex shapes
representing different chemical apparata. Three major cases were studied. The first
one is a two-phase plate reactor with a complex structure of intersecting micro channels
engraved on one plate which is covered by another plain plate. The second case is a
tubular microreactor, consisting of two subcases. The first subcase is a multi-channel
two-component commercial micromixer (slit interdigital) used to mix two liquid reagents
before they enter the reactor. The second subcase is a micro-tube, where the distribution
of the heat generated by the reaction was studied. The third case is a conventionally
packed column. However, flow, reactions or mass transfer were not modeled. Instead, the
research focused on how to describe mathematically the realistic geometry of the column
packing, which is rather random and can not be created using conventional computeraided
design or engineering (CAD/CAE) methods.
Several modeling approaches were used to describe the performance of the processes in the
considered vessels. Computational fluid dynamics (CFD) was used to describe the details
of the flow in the plate microreactor and micromixer. A space-averaged mass transfer
model based on Fick’s law was used to describe the exchange of the species through the
gas-liquid interface in the microreactor. This model utilized data, namely the values of
the interfacial area, obtained by the corresponding CFD model. A common heat transfer
model was used to find the heat distribution in the micro-tube. To generate the column
packing, an additional multibody dynamic model was implemented. Auxiliary simulation
was carried out to determine the position and orientation of every packing element in the
column. This data was then exported into a CAD system to generate desirable geometry,
which could further be used for CFD simulations.
The results demonstrated that the CFD model of the microreactor could predict the flow
pattern well enough and agreed with experiments. The mass transfer model allowed to
estimate the mass transfer coefficient. Modeling for the second case showed that the flow
in the micromixer and the heat transfer in the tube could be excluded from the larger model which describes the chemical kinetics in the reactor. Results of the third case
demonstrated that the auxiliary simulation could successfully generate complex random
packing not only for the column but also for other similar cases.