Production of Chemicals from Woody Biomass by Wet Oxidation 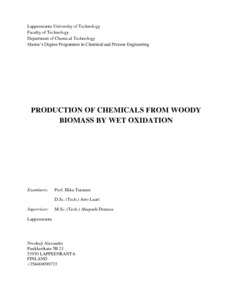