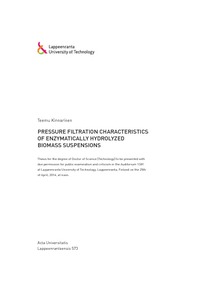 Enzymatic hydrolysis of lignocellulosic polymers is likely to become one of the key technologies
enabling industrial production of liquid biofuels and chemicals from lignocellulosic biomass.
Certain types of enzymes are able to hydrolyze cellulose and hemicellulose polymers to shorter
units and finally to sugar monomers. These monomeric sugars are environmentally acceptable
carbon sources for the production of liquid biofuels, such as bioethanol, and other chemicals, such
as organic acids. Liquid biofuels in particular have been shown to contribute to the reduction of net
emissions of greenhouse gases.
The solid residue of enzymatic hydrolysis is composed mainly of lignin and partially degraded
fibers, while the liquid phase contains the produced sugars. It is usually necessary to separate these
two phases at some point after the hydrolysis stage. Pressure filtration is an efficient technique for
this separation.
Solid-liquid separation of biomass suspensions is difficult, because biomass solids are able to retain
high amounts of water, which cannot be readily liberated by mechanical separation techniques.
Most importantly, the filter cakes formed from biomaterials are compressible, which ultimately
means that the separation may not be much improved by increasing the filtration pressure. The use
of filter aids can therefore facilitate the filtration significantly. On the other hand, the upstream
process conditions have a major influence on the filtration process. This thesis investigates how
enzymatic hydrolysis and related process conditions affect the filtration properties of a cardboard
suspension. The experimental work consists of pressure filtration and characterization of
hydrolysates. The study provides novel information about both issues, as the relationship between
enzymatic hydrolysis conditions and subsequent filtration properties has so far not been considered
in academic studies.
The results of the work reveal that the final degree of hydrolysis is an important factor in the
filtration stage. High hydrolysis yield generally increases the average specific cake resistance.
Mixing during the hydrolysis stage resulted in undefined changes in the physical properties of the
solid residue, causing a high filtration resistance when the mixing intensity was high. Theoretical
processing of the mixing data led to an interesting observation: the average specific cake resistance
was observed to be linearly proportional to the mixer shear stress. Another finding worth attention
is that the size distributions of the solids did not change very dramatically during enzymatic hydrolysis. There was an observable size reduction during the first couple of hours, but after that
the size reduction was minimal. Similarly, the size distribution of the suspended solids remained
almost constant when the hydrolyzed suspension was subjected to intensive mixing.
It was also found that the average specific cake resistance was successfully reduced by the use of
filter aids. This reduction depended on the method of how the filter aids were applied. In order to
obtain high filtration capacity, it is recommended to use the body feed mode, i.e. to mix the filter
aid with the slurry prior to filtration. Regarding the quality of the filtrate, precoat filtration was
observed to produce a clear filtrate with negligible suspended solids content, while the body feed
filtrates were turbid, irrespective of which type of filter aid was used.