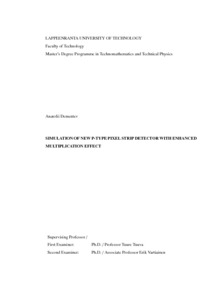 This Master’s Thesis is dedicated to the simulation of new p-type pixel strip detector with enhanced multiplication effect. It is done for high-energy physics experiments upgrade such as Super Large Hadron Collider especially for Compact Muon Solenoid particle track silicon detectors. These detectors are used in very harsh radiation environment and should have good radiation hardness. The device engineering technology for developing more radiation hard particle detectors is used for minimizing the radiation degradation. New detector structure with enhanced multiplication effect is proposed in this work. There are studies of electric field and electric charge distribution of conventional and new p-type detector under reverse voltage bias and irradiation. Finally, the dependence of the anode current from the applied cathode reverse voltage bias under irradiation is obtained in this Thesis. For simulation Silvaco Technology Computer Aided Design software was used. Athena was used for creation of doping profiles and device structures and Atlas was used for getting electrical characteristics of the studied devices. The program codes for this software are represented in Appendixes.