Forecasting of wind speeds and directions with artificial neural networks 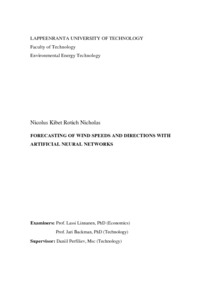 In this master’s thesis, wind speeds and directions were modeled with the aim of developing suitable models for hourly, daily, weekly and monthly forecasting. Artificial Neural Networks implemented in MATLAB software were used to perform the forecasts. Three main types of artificial neural network were built, namely: Feed forward neural networks, Jordan Elman neural networks and Cascade forward neural networks. Four sub models of each of these neural networks were also built, corresponding to the four forecast horizons, for both wind speeds and directions. A single neural network topology was used for each of the forecast horizons, regardless of the model type. All the models were then trained with real data of wind speeds and directions collected over a period of two years in the municipal region of Puumala in Finland. Only 70% of the data was used for training, validation and testing of the models, while the second last 15% of the data was presented to the trained models for verification. The model outputs were then compared to the last 15% of the original data, by measuring the mean square errors and sum square errors between them. Based on the results, the feed forward networks returned the lowest generalization errors for hourly, weekly and monthly forecasts of wind speeds; Jordan Elman networks returned the lowest errors when used for forecasting of daily wind speeds. Cascade forward networks gave the lowest errors when used for forecasting daily, weekly and monthly wind directions; Jordan Elman networks returned the lowest errors when used for hourly forecasting. The errors were relatively low during training of the models, but shot up upon simulation with new inputs. In addition, a combination of hyperbolic tangent transfer functions for both hidden and output layers returned better results compared to other combinations of transfer functions. In general, wind speeds were more predictable as compared to wind directions, opening up opportunities for further research into building better models for wind direction forecasting.