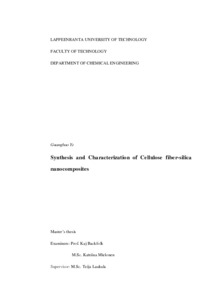 Cellulose fiber-silica nanocomposites with novel mechanical, chemical and thermal properties have potential to be widely applied in different area. Monodispered silica nanoparticles play an important role in enhancing hybrids properties of hardness, strength, thermal stability etc. On the other hand, cellulose is one of the world’s most abundant and renewable polymers and possesses several unique properties required in many areas and biomedicine.
The aim of this master thesis is to study if silica particles from reaction of sodium silicate and sulphuric acid can be adsorbed onto cellulose fiber surfaces via in situ growth. First, nanosilica particles were synthesized. Effect of pH and silica contents were tested. In theoretical part, introduction of silica, methods of preparation of nanosilica from sodium silicate, effect factors and additives were discussed. Then, cellulose fiber-silica nanocomposites were synthesis via route from sodium silicate and route silicic acid. In the experiment of route from sodium silicate, the effects of types of sodium silicate, pH and target ratio of silica to fiber were investigated. From another aspect, the effects of types of sodium silicate, fiber concentration in mixture solution and target ratio of silica to fiber were tested in the experiment of route from silicic acid. Samples were investigated via zeta potential measurement, particle size distribution, ash content measurement and Scanning Electron Microscopy (SEM).
The Results of the experiment of preparing silica sol were that the particle size of silica sol was smaller prepared in pH 11.7 than that prepared in pH 9.3. Then in the experiment of synthesis of cellulose fiber-silica nanocomposites, it was concluded that the zeta potential of all the samples were around -16 mV and the highest ash content of all the samples was only 1.4%. The results of SEM images showed only a few of silica particles could be observed on the fiber surface, which corresponded to the value of ash content measurement.