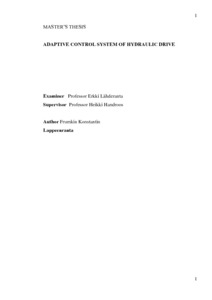 Adaptive control systems are one of the most significant research directions of modern control theory. It is well known that every mechanical appliance’s behavior noticeably depends on environmental changes, functioning-mode parameter changes and changes in technical characteristics of internal functional devices. An adaptive controller involved in control process allows reducing an influence of such changes. In spite of this such type of control methods is applied seldom due to specifics of a controller designing.
The work presented in this paper shows the design process of the adaptive controller built by Lyapunov’s function method for the Hydraulic Drive. The calculation needed and the modeling were conducting with MATLAB® software including Simulink® and Symbolic Math Toolbox™ etc. In the work there was applied the Jacobi matrix linearization of the object’s mathematical model and derivation of the suitable reference models based on Newton’s characteristic polynomial. The intelligent adaptive to nonlinearities algorithm for solving Lyapunov’s equation was developed.
Developed algorithm works properly but considered plant is not met requirement of functioning with. The results showed confirmation that adaptive systems application significantly increases possibilities in use devices and might be used for correction a system’s behavior dynamics.