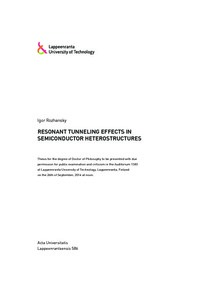 The thesis is devoted to a theoretical study of resonant tunneling phenomena in semiconductor heterostructures and nanostructures. It considers several problems relevant to modern solid state physics. Namely these are tunneling between 2D electron layers with spin-orbit interaction, tunnel injection into molecular solid material, resonant tunnel coupling of a bound state with continuum and resonant indirect exchange interaction mediated by a remote conducting channel.
A manifestation of spin-orbit interaction in the tunneling between two 2D electron layers is considered. General expression is obtained for the tunneling current with account of Rashba and Dresselhaus types of spin-orbit interaction and elastic scattering. It is demonstrated that the tunneling conductance is very sensitive to relation between Rashba and Dresselhaus contributions and opens possibility to determine the spin-orbit interaction parameters and electron quantum lifetime in direct tunneling experiments with no external magnetic field applied.
A microscopic mechanism of hole injection from metallic electrode into organic molecular solid (OMS) in high electric field is proposed for the case when the molecules ionization energy exceeds work function of the metal. It is shown that the main contribution to the injection current comes from direct isoenergetic transitions from localized states in OMS to empty states in the metal. Strong dependence of the injection current on applied voltage originates from variation of the number of empty states available in the metal rather than from distortion of the interface barrier.
A theory of tunnel coupling between an impurity bound state and the 2D delocalized states in the quantum well (QW) is developed. The problem is formulated in terms of Anderson-Fano model as configuration interaction between the carrier bound state at the impurity and the continuum of delocalized states in the QW. An effect of this interaction on the interband optical transitions in the QW is analyzed. The results are discussed regarding the series of experiments on the GaAs structures with a -Mn layer.
A new mechanism of ferromagnetism in diluted magnetic semiconductor heterosructures is considered, namely the resonant enhancement of indirect exchange interaction between paramagnetic centers via a spatially separated conducting channel. The underlying physical model is similar to the Ruderman-Kittel-Kasuya-Yosida (RKKY) interaction; however, an important difference relevant to the low-dimensional structures is a resonant hybridization of a bound state at the paramagnetic ion with the continuum of delocalized states in the conducting channel. An approach is developed, which unlike RKKY is not based on the perturbation theory and demonstrates that the resonant hybridization leads to a strong enhancement of the indirect exchange. This finding is discussed in the context of the known experimental data supporting the phenomenon.