Modelling of ultrasound assisted mixing in Newtonian and non-Newtonian liquids 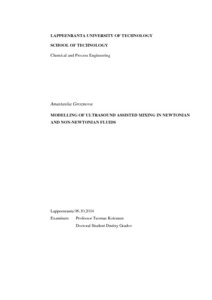 The purpose of this work is to obtain a better understanding of behaviour of possible ultrasound appliance on fluid media mixing. The research is done in the regard to Newtonian and non-Newtonian fluids. The process of ultrasound appliance on liquids is modelled in COMSOL Multiphysics software. The influence of ultrasound using is introduced as waveform equation. Turbulence modelling is fulfilled by the k-ε model in Newtonian fluid. The modeling of ultrasound assisted mixing in non-Newtonian fluids is based on the power law. To verify modelling results two practical methods are used: Particle Image Velocimetry and measurements of mixing time. Particle Image Velocimetry allows capturing of velocity flow field continuously and presents detailed depiction of liquid dynamics. The second way of verification is the comparison of mixing time of homogeneity. Experimentally achievement of mixing time is done by conductivity measurements. In modelling part mixing time is achieved by special module of COMSOL Multiphysics – the transport of diluted species. Both practical and modelling parts show similar radial mechanism of fluid flow under ultrasound appliance – from the horn tip fluid moves to the bottom and along the walls goes back. Velocity profiles are similar in modelling and experimental part in the case of Newtonian fluid. In the case of non-Newtonian fluid velocity profiles do not agree. The development track of ultrasound-assisted mixing modelling is presented in the thesis.