Improving the environmental safety of ash from bioenergy production plants 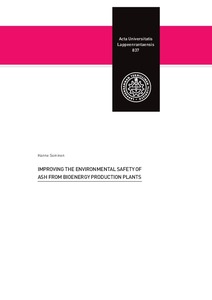 Each year, energy production plants in Eastern Finland produce just under 100,000 tonnes of different types of ash and slag in the process of energy production. The utilisation of energy production ash flows has made progress in a variety of ways, but it is still difficult to find the right utilisation applications for some of these fractions due to, among other things, the hazardous substances they contain. According to the most recent Finnish government programme, Finland will be a leader in the bio- and circular economy as well as cleantech. The side-streams produced by energy production plants and the trace elements contained in them should indeed be returned to forests as fertiliser, whilst taking environmental safety into consideration.

This thesis investigated ash fractions formed in Eastern Finland energy production and the ash processing technologies designed for the purpose of promoting their utilisation. The methods used in the thesis research include ash fractionation and ageing. Furthermore, assessed the volume, types and properties (e.g. the total and soluble concentrations of various hazardous substances) of various ash and compared them with statutory requirements.

The As, Cd, Pb and Zn concentrations found in ash produced in Eastern Finland hampers their utilisation in forests and for other purposes. Fractionation tests conducted with an electrostatic precipitator reduced the As, Cd and Zn concentrations of fly ash. Fractionation reduced Cd and Zn concentrations to a point where the fly ash could be used as fertiliser (forest use). However, universally applicable values cannot be defined for the electrostatic precipitator parameters used in fractionation. According to the research results obtained, ageing cannot alone be considered a reliable processing method for the reduction of heavy metal concentrations and solubility properties of fly ash. In the case of certain, individual hazardous substances, ageing can, however, be used to achieve an adequate reduction in concentration. In such cases, ageing would still require some sort of enhancement.

During research, a soil improver made up of compost and fractionated, processed fly ash was granulated using a layering method. The granulation of materials improved their process ability and reduced the spread of dust. The ash mixture had a positive impact on compost quality where fertility nutrients were concerned. However, the ash mixture increased the heavy metal concentrations of the granules, despite the second fraction processing. The productising of ash by means of granulation is used as a method in, for example, forest fertilisers.

Amendments to legislation concerning the utilisation of ash and national requirements in the circular economy will increase the need for ash post-processing. The trace elements and other nutrients found in fly ash would be a positive addition to the circular economy. In the future, the processing of various types of ash should be further researched and post-processing should be developed in order to meet the requirements and limit values (earth construction and fertiliser use) for the utilisation of bottom and fly ash produced by all energy production plants run on wood-based fuels.