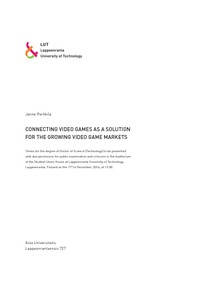 The growth and development of the video game industry has led to fierce
competition for customers’ attention. Video game companies are using increasing
amounts of money in advertising to gain visibility in the markets. In addition,
the owners of digital distribution stores tend to favor the most successful video
games when showcasing and suggesting new games for the players. Both these
tendencies make it hard for small and new video game companies to compete in
the same video game markets with the larger and well-known companies.
The goal of this thesis is to develop a general technical solution which would
enable video games to exchange knowledge and allow video game developers
to create games that can be connected to each other, for example by sharing
common characters or items. This solution approaches the problem of visibility
and discoverability on the video game markets from the viewpoint of enabling
co-operation between video game companies. This is done by using semantic
technologies to create a general model of video game information, allowing the
video games to exchange semantically enriched knowledge about their game
contents, instead of raw data.
The research has been conducted by following the principles of Design Science
Research. The research started by performing a literature study to find out the
current state of the art in the research of connecting video games. In addition,
video game developers were interviewed to gather requirements and opinions on
the possibility of connecting video games with each other. Based on the interview
results, an ontology for modeling video game information was created. This model
was then used as the basis for creating a platform to enable connecting separate
video games. Also, a survey among Counter-Strike players was carried out to find
out if players could be motivated to perform physical exercises in order to gain
digital rewards in their favorite video games.
The ontology model was shown to be able to model and capture video game
information in a general manner. The ontology, combined with the developed
platform, allows video game developers to connect separate video game products
with each other and to create new models for interaction between the games. The
performed survey suggested that players are willing to do physical exercises in
order to gain bonuses in video games.