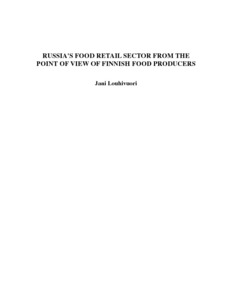 This research paper focuses on the Russian food retail sector and its structure and development.
At the momentit is one of the fastest growing markets today with 12.1% growth last year (2004).
The growth originates from high oil price, which has been accumulated to people's wages. They
are growing nominally more than 20% annually. But even though the income increases, the share
of food of all retailtrade has been fairly stable with only a slight decline. Thus, the consumption
is shifting to products with more quality and value.
The shareof modern retail outlets is low, as the Russian retail sector is still very dispersed to
traditional retail outlets such as kiosks, open markets and small grocery stores. The store chains
are, however, becoming more and more significant. The biggest market for retailers is Moscow
but nowadays the chains are expanding rapidly into other regions. Even though the markets have
not been saturated in Moscow, the best prospects for growth are in the regions. The most
important factor restricting the growth in Moscowis the availability of real estate and land plots
for stores.
The market is moving forward to saturation, and a consolidation process will follow. In fact, it
has already started but not many acquisitions have been made so far. To this point the domestic
chains have settled to form only alliances. The foreign players will be very strong in the
tightening competition in the future. The problem of domestic chains is that the stores are nonstandardized,
which is not cost-efficient.
The chains are trying to enhance their power in price negotiations by forming purchasing
alliances, introducing private label goods and using the regional expansion as a striking weapon.
In order to follow the growing chains to other regions the producer must sell its products to the
chains at favorable terms.
Suppliers are strong in negotiations when they have a functioning distribution network, ability to
JIT deliveries, proper documentationpolicies, a strong brand, reliability in deliveries and a fair
price. The size of the entry ticket, i.e. the listing fee may define the shelf space a producer gets in
the stores.