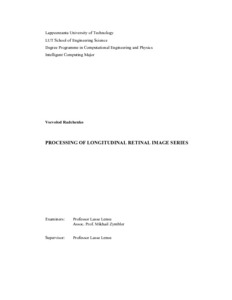 A particular interest in medical image processing can be found in the case when a series of images captured at different time points from the same patient is provided for the analysis. This work focuses on the processing of such sets of retinal images called longitudinal image series. Several image preprocessing methods was considered in the application to longitudinal retinal image series, such as noise removal, image registration, and photometric correction. The impact of the latter technique on the further analysis was evaluated. A set of longitudinal image analysis techniques was also considered, including change detection and visualization, target segmentation, and change prediction. An experiment was conducted to establish possible regularities in the rates of the change occurrences throughout the dataset series. The experiment demonstrated that about 56% of the selected image sequences contain regions of blood vessels which widen with the equal rate between consequent time points.