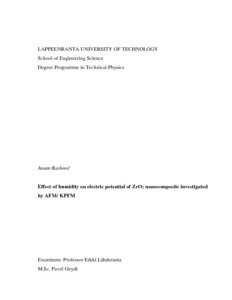 ZrO2 nanocomposites were investigated bearing in mind their potential in displaying varying surface potential due to changes in humidity in the environment. Scanning Probe Microscopy (SPM) was used in general for studying the electrical properties as it allowed the visualization of electrical properties. The sample was studied under different levels of humidity.
Kelvin Probe Force Microscopy (KPFM) was the main technique utilized to characterize the varying charge distribution on the sample’s topography. The influence of humidity on the electric potential was shown. The results concluded that electrical potential changes with change in environment’s humidity level.