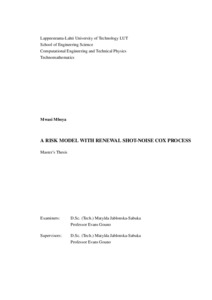 An algorithm to simulate such time jumps is proposed in this work via the inversion method that could be useful in an insurance company. (1.583Mb)
Lataukset:

Catastrophic events may lead to sudden changes in the claim arrival rate and as a result it is difficult to predict the likelihood for the occurrence of these events. These random fluctuation cannot be modeled as a homogeneous Poisson process. Hence, the introduction of doubly stochastic Poisson process or Cox process has been an important tool in modelling such catastrophic events and reduce the probability of ruin to many of the insurance companies. This research therefore proposes a risk model with stochastic intensity function as a first step towards the process of computing the probability of ruin. Several sample paths of the model with varying parameter values are shown as a first step in understanding how the model works. A major assumption of this model is that the time of jumps follows a renewal shot-noise Cox process and that all past times are considered. This idea is essential in estimating parameters using different statistical techniques such as maximum likelihood estimation method and Bayesian estimation method in the model such as the initial intensity value, the rate of claim settlement and some parameters from other arbitrary distributions. An algorithm to simulate such time jumps is proposed in this work via the inversion method.